The greenhouse gas we exhale is called carbon dioxide.

Carbon dioxide is a gas consisting of molecules built up of one carbon atom and two oxygen atoms. CO₂ is an uncoloured and non-smelling gas at room temperature. When the temperature drops below -78°C at normal pressure, it directly freezes into solid state (commonly known as "dry ice").

CO₂ is used in a process called photosynthesis, which makes it one of the most important gases on Earth. Photosynthesis takes place in green plants, which can capture sunlight using its chlorophyll. The plants use solar energy to turn water and carbon dioxide into sugar while releasing oxygen. For humans and animals, on the other hand, CO₂ is our exhaust which negatively affects our health and well-being.

Global warming potential (GWP) is a measurement of how much heat a greenhouse gas traps in the atmosphere in a specific time horizon (commonly 20, 100, or 500 years) relative to carbon dioxide. Essentially, GWP compares the amount of heat trapped by a certain mass of a type of gas to the amount of heat trapped by a similar mass of carbon dioxide. CO₂ has a GWP of 1. More powerful greenhouse gases include methane and dinitrogen oxide, that have a GWP of 25 and 298, respectively. The GWP value for a gas molecule depends on how stable it is, how strongly it absorbs infrared (IR) radiation, and where on the spectrum the absorption peaks are. 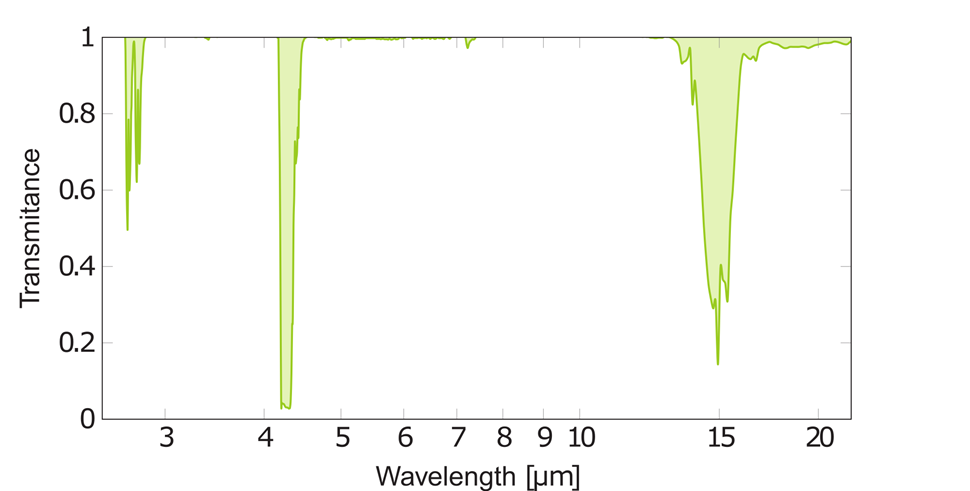 The IR spectrum of carbon dioxide has a strong absorption band consisting of many overlapping peaks. This band, caused by asymmetrical C=O stretching, is placed at a wavelength of 4.3 µm. At this wavelength, CO₂ molecules in the atmosphere absorb emitted heat radiation from Earth, and in that way decrease cooling, especially during clear nights. The mechanism of the increasing amount of carbon dioxide and other more powerful greenhouse gases is that they block IR radiation from leaving Earth and returning to space.

Thanks to the natural greenhouse effect, the average temperature on Earth is around 15°C. Without any greenhouse gases, it would be around -18°C. However, CO₂ can have negative effects. With the increased concentrations of greenhouse gases, more IR-radiation will be absorbed and stay close to Earth's surface, thus increasing the temperature.

Indoors, the aim is a CO₂ level of 500-800 ppm. CO₂ is regarded as non-toxic at low concentrations. But as the concentration rises, it also causes drowsiness and affects our cognitive functions, e.g. reduced learning performance and decision-making. At levels above 40,000-50,000 ppm, it causes unconsciousness and eventually death.

*Atoms and molecules are very plentiful, and the mole allows scientists to count those types of units and particles. A mole is a number, like a dozen is 12 and a pair is 2. A mole is 6.022x1023 of anything.

In essence, a mole is used to be able to count large quantities of particles.

Dry mole fraction = the mole fraction of the dry air portion of a sample, which explains why the numbers are higher than the corresponding numbers where humidity is not excluded. Dry mole fraction is the recalculated value used by scientists in order to get comparable data over time.