The family of refrigerant gases.

Freon is originally a trademark for a compound with the general formula CFₓCl₄₋ₓ or C₂FₓCl₆₋ₓ. Nowadays, freons are more widely described as substituted hydrocarbons, where a number of, or all, hydrogen atoms are exchanged for fluorine, chlorine or (more rarely) bromine. Two examples from this large family are Dichlorodifluoromethane (R-12) and Tetrafluoroethane (R-134a).

Freon gases are used as refrigerants and often abbreviated as R-11, R-40, etc. Another use is as propellants in medical inhalants. Normally, freons are inert at room temperature and they are more or less non-toxic for human beings. At a warm surface, hotter than 250°C, they might decompose to give toxic and corrosive HF(g) or other unpleasant gases.

The inertness of the freon gases creates a problem, since they survive in the environment for a long time, eventually diffusing into the stratosphere (altitudes of 25 – 40 km) to decompose and simultaneously destroy the protective ozone layer. The freon with the highest ozone-depleting potential (ODP) is R-11 (CFC-11), trichlorofluoromethane. ODP is a measure of stratospheric ozone destroyed by a chemical relative to the amount destroyed by R-11. Besides freons, there are other chemicals with high ODP, for example, dinitrogen oxide and fire extinguishers such as halons. 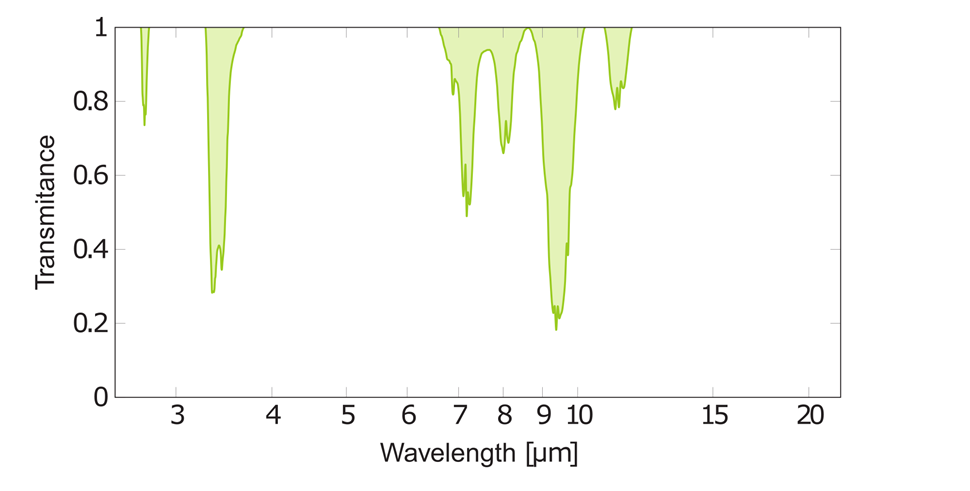 The IR spectra of various freon gases are rather complex. There are a number of peaks from stretching, rocking, or deformation. The strongest C-F absorption peaks are often found on both sides of 10 µm, which is shown above for CFCl and CF₂Cl₂.