The family of explosive gases.

Hydrocarbons are organic compounds with the general formula CₓHy.

As a rule of thumb, many carbon atoms in a hydrocarbon molecule give higher boiling and melting points. For example, butane (C₄H₁₀) is a gas at room temperature, whereas the compound octane (C₈H₁₈) is a liquid. All of them are flammable, and they are often used as fuels in various applications. For example, butane is found in LPG, liquefied petroleum gas, and octane is the major hydrocarbon in gasoline. Hydrocarbons are also common for fabrication of plastics and as solvents. Hydrocarbons are divided into four main groups:

Propane, C₃H₈, is a typical alkane with three carbon atoms. Ethene, C₂H₄, is the smallest alkene, with one C=C double bond.

Below, two types of drawings of the most typical arene, benzene (C₆H₆), are presented. The example to the right is more common, and shows that all electrons are equally shared between six carbon atoms in a flat ring. 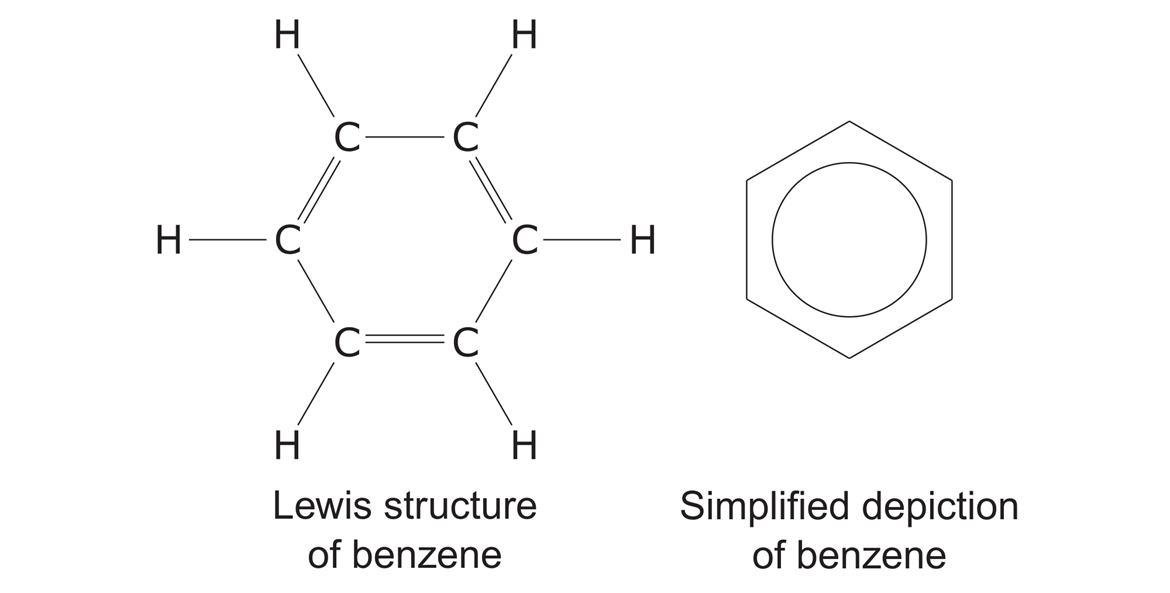 The Lewis structure may become cumbersome and difficult to read in more complex molecule structures. As a response to this, simplifications (like the simplified depiction above) have been developed. These are based on the fact that carbon always take four bonds (and hydrogen only takes one bound), thus forming the rings seen in the example above. 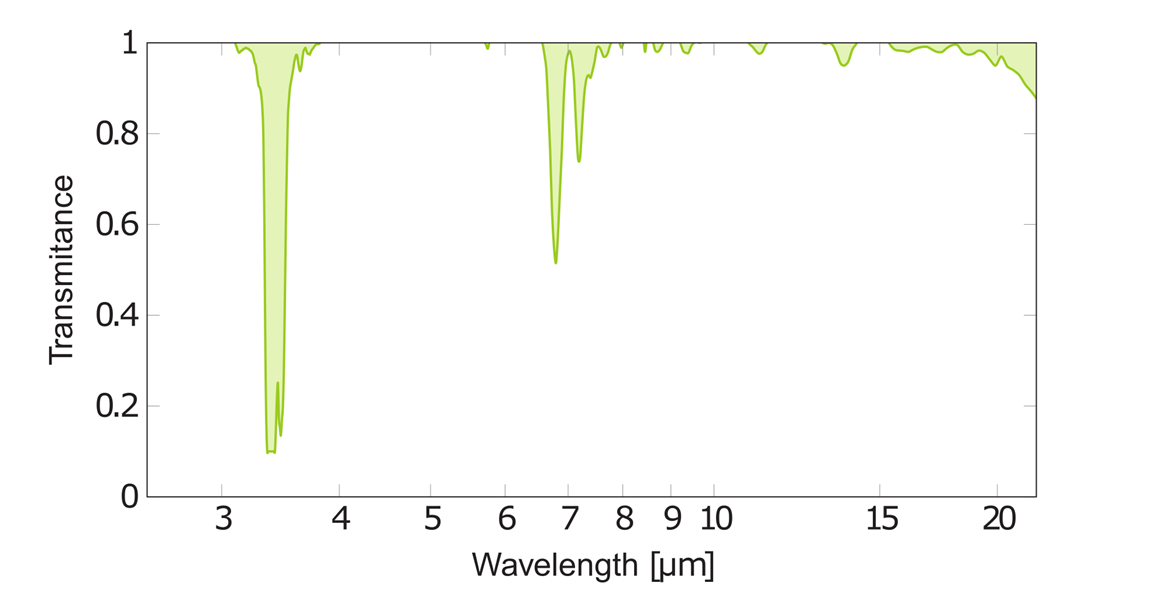 Regardless of the molecule formula or exact composition of a hydrocarbon mixture, the hydrocarbons have a peak at 3.4 µm. The C-C stretchings from alkane chains absorb in weak broad bands between 7.7 – 12.5 µm. Besides that, there are strong peaks from --CH₃ or --CH₂ groups at 6.7 – 7.7 µm due to C-H bending. Typical alkane peaks for hexane are shown in graph above.

A double bond in an alkene gives C=C stretching at 6.1 µm. A sharp vibration band near 6.7 µm indicates presence of a benzene ring in an arene.

C₂H₄ is a colorless gas with a slightly sweet smell. The vapor can cause tiredness or dizzyness and leads to a high risk for suffocation. Ethene is very flammable and could easily be ignited by sparks. Ethene is well-known for its ability to stimulate the ripening of fruits. In nature, the gas is produced during plant metabolism and is classified as a plant hormone. It is used for producing plastics such polyethene (polyethylene) and polyvinyl chloride (PVC).

The IR spectrum of ethene (C₂H₄). 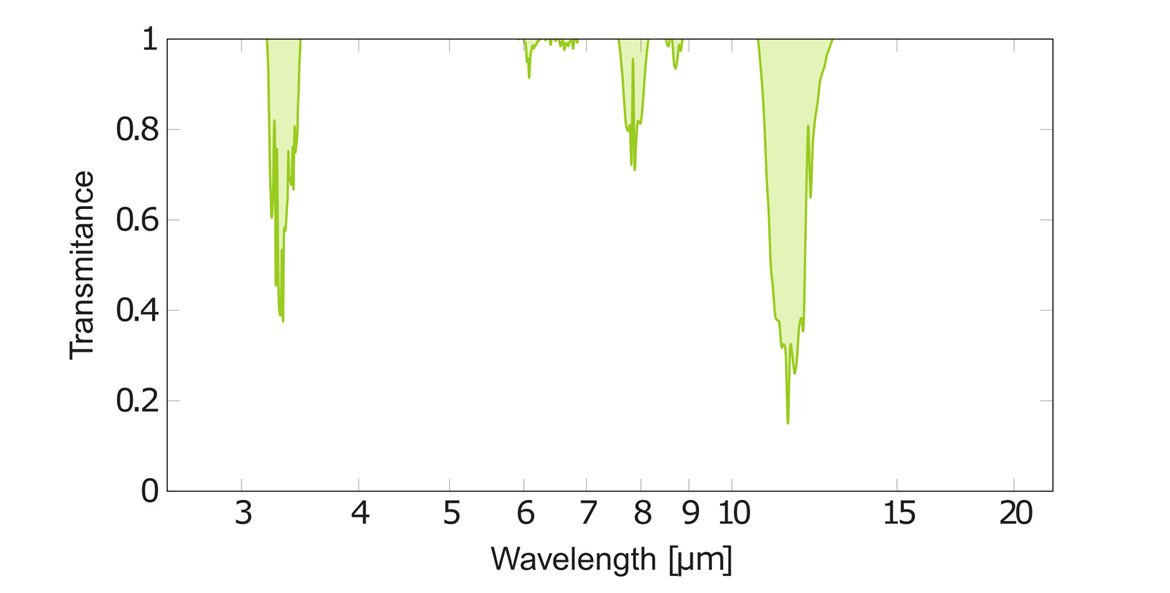 The IR spectrum of ethene is rather uncomplicated thanks to its simple structure. It has a strong band at 11 µm due to H-C-H out-off-plane wagging. Also, ethene has relatively weak absorption peaks at 7.1 µm from H-C-H scissoring and 3.2 µm from C-H assymetric stretching. Note that the C=C double bond in the C₂H₄ molecule cannot absorb IR radiation, because it has a totally symmetric vibration. That type of bond is called IR inactive.

Liquified petroleum gas (LPG) is a mixture of hydrocarbons (mostly propane and butane), with formulae C₃H₈ and C₄H₁₀, respectively. In large concentrations, LPG may cause asphyxiation. Examples of LPG are propane, n-butane and isobutane.

In addition to any LPG mixture, there is always an odorant, so that a leak can be discovered. Often, the odorant is a bad-smelling thiol, an organic molecule with a --SH group which has a very low threshold for human detection (on the level of ppb, parts per billion). Liquified petroleum gas is extremely flammable and is therefore suitable for burners, heating appliances, and vehicles. Also, it is used as aerosol propellants, and as refigrerants instead of freons.

Methane (CH₄), the smallest hydrocarbon, is an uncolored and non-smelling gas. It has a symmetrical non-polar structure, where the carbon atom is surrounded by four hydrogen atoms in a perfectly tetrahedral arrangement.

CH₄ is regarded as non-toxic for humans, but may displace oxygen in a closed space and cause a risk of suffocation. CH₄ is extremely flammable and may form explosive mixtures with air.

Normally, the gas is formed in swamps or other oxygen-poor environments such as soil, manure, or sewage plants. Other major methane sources are mining, processing and use of coal, oil, and natural gas. Since it has a simpler structure, the IR spectrum of methane is less complicated than spectra from larger hydrocarbons.

Unfortunately, methane is a powerful greenhouse gas. Methane emissions are expressed in carbon dioxide equivalents using its global warming potential (GWP). One kg CH₄ is more than 20 times as effective at trapping heat in Earth's atmosphere as one kg of CO₂, within a time horizon of 100 years.

The IR spectrum of methane (CH₄).

In the IR spectrum of methane, there are two strong absorption bands consisting of many overlapping peaks. They are found at 3.3 µm and 7.7 µm due to C-H stretching and bending modes, respectively.