Between 30 and 50 children in the US die every year as a direct result of being left in a vehicle. For animals, the numbers are unknown, but if we look at the documented American police K-9s that have died in hot cars, we see that around 10 to 20 working police dogs die each year.

The use of carbon dioxide sensors inside moving cars is a good way to control the ventilation. The sensor is also able to detect people inside a parked vehicle.

Another way of using the same sensor technology in a closed space, such as a car interior, is to monitor the level of CO₂ and see if it is increasing even when the car is thought to be empty. If the slightest increase of CO₂ is detected, it becomes clear that the car is not empty. A dog or baby left in a car during a hot day (or even a cool day) is in danger of being exposed to deadly temperatures. The ambient temperature has very little to do with the inside temperature, it only affects the starting temperature. A general rule of thumb is that the temperature inside a car (even with open windows) rises 1 °C per 1 minute. Within 10 minutes, the inside car temperature reaches deadly levels (close to, or above, body temperature). Children and dogs have a hard time coping with that level of heat and can easily faint, making it even harder for people passing by to detect their urgent situation. A CO₂ based alarm system could force down windows, sound the alarm, or force the environment control system to activate.

To investigate what levels of CO₂ a child or animal contribute when inside a car, Senseair performed a test using a family of two adults, two children (8 months and 4 years old) and a dog. The car used was a Volvo V70. As reference, a driver plus one, two, or three passengers were also monitored in the same car. Ambient air temperature was around 0°C. The results are shown in the graph below. 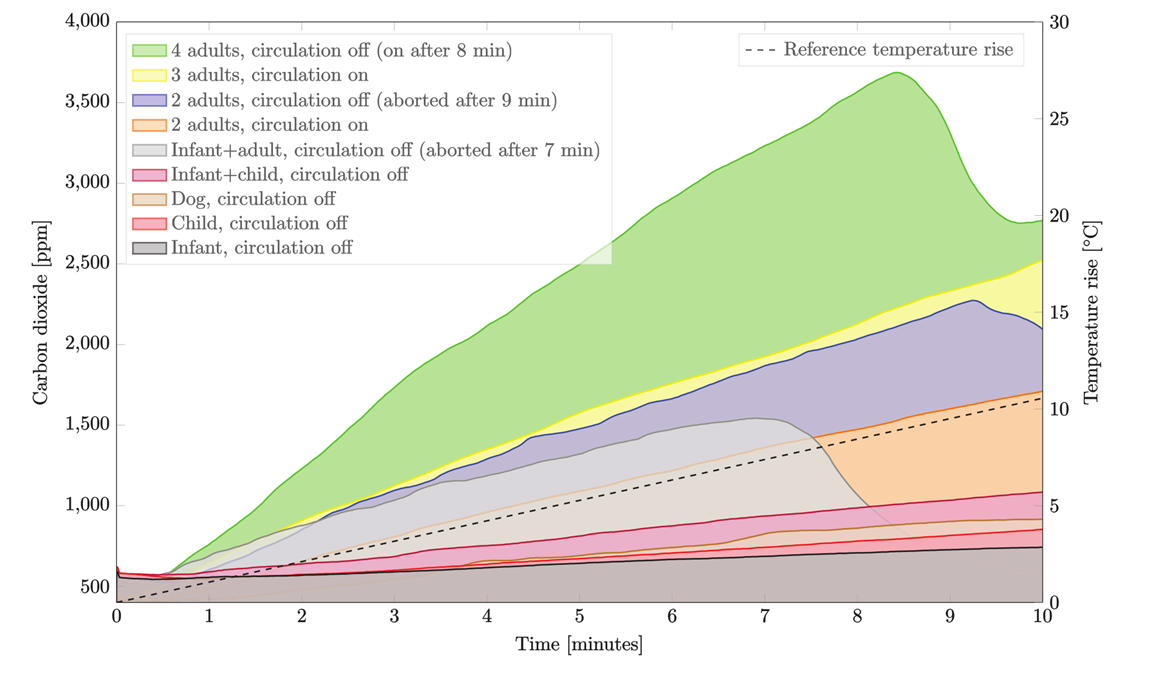 As seen in the graph, the child, infant, or dog on their own generate the lowest carbon dioxide increase, but they will increase CO₂ levels with about 200 – 400 ppm during a 10-minute period. To further understand this small, but significant, change in CO₂ levels, we can calculate the levels of an unoccupied car and see what happens to the CO₂. 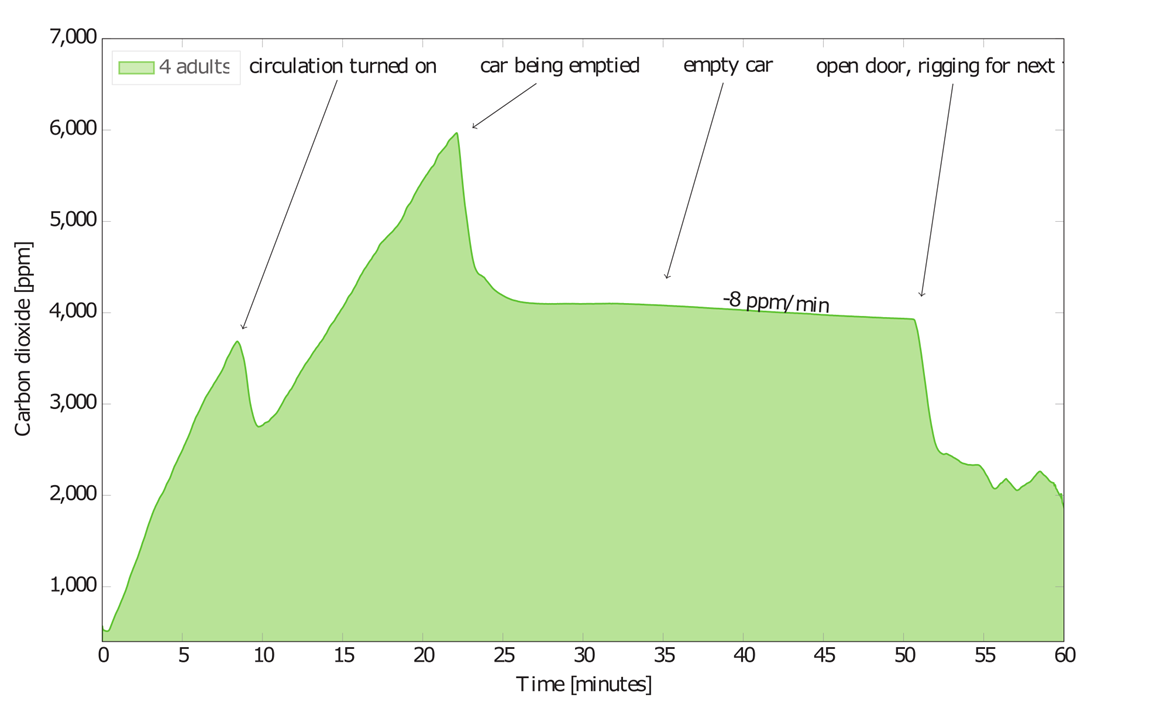 The four people inside the car started with circulation turned off during the first 8 minutes. When the circulation was turned back on, the levels dropped almost 1,000 ppm. This can be explained by the fact that pockets of fresh air were mixed with the higher CO₂ air. After another 14 minutes, everyone exited the car and a quick decrease by 2,000 ppm was noted. With an empty car, the CO₂ molecules exits the car with an average flow of 8 ppm/minute. With this in mind, it is easy to see that even a small increase in CO₂ is a sign of a child or animal left inside a car.

In the last part of the graph, we see the point when the car door is opened (after 51 minutes), and a technician enters the vehicle and starts rigging for the next test. 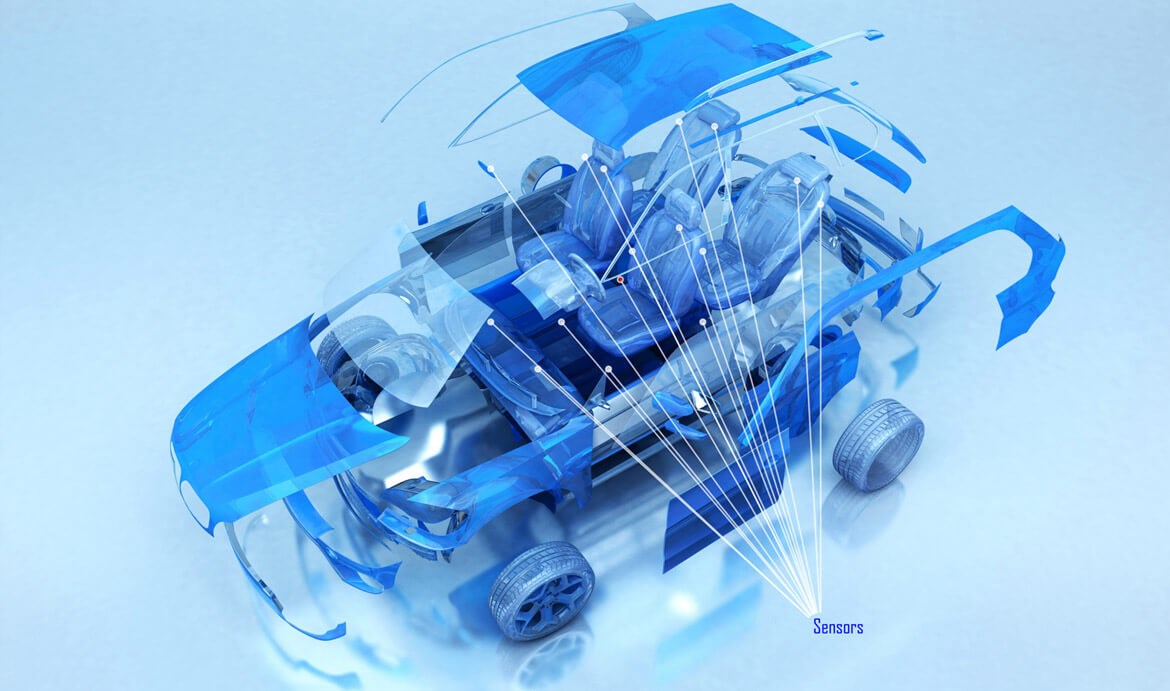 The car was equipped with 18 gas sensors, and the best response time was found to be in the center of the car, between the two front seats (seen as a red dot in the image above).

The carbon dioxide gas alarm cannot be manipulated. Since a supposedly empty car will slowly drop in CO₂ levels after the car is left by the people in it, it would be considered a false positive signal if the level started rising after the initial drop and a period of non-rising CO₂.

For more accurate results, it is suggested that these tests should be done on more types of vehicles.