In the publication “School Environment: Policies Current Status”, the World Health Organization shares information about many aspects of indoor climate, and carbon dioxide (CO₂) is one of the focus areas. The report is based on a questionnaire involving 31 countries spread across western Europe and western Asia.

The SINPHONIE project (Schools Indoor Pollution and Health - Observatory Network in Europe), which is referred to in the report, advise that many measures need be taken in order to get a good environment for education. Good indoor air quality is the basis of lower rates of absenteeism among students and teachers, stronger academic performance, better teacher retention and job satisfaction, cost savings in many areas including building maintenance, and less sick leave.

Very few countries have legally stated what levels of CO₂ should be obeyed, but an increasing number of countries have taken actions in the right direction, many of which have done so as a result of the questionnaire done by the WHO.

Out of the 31 countries questioned, 37% had some law or recommendation of allowed levels of ventilation or CO₂. Only 7 % of the countries wanted these levels to be constantly monitored. The maximum allowed ppm (parts per million) levels ranged from 1,000 to 5,000 ppm. These numbers can be compared to temperature recommendations (and laws), which 76% of the countries had in place. 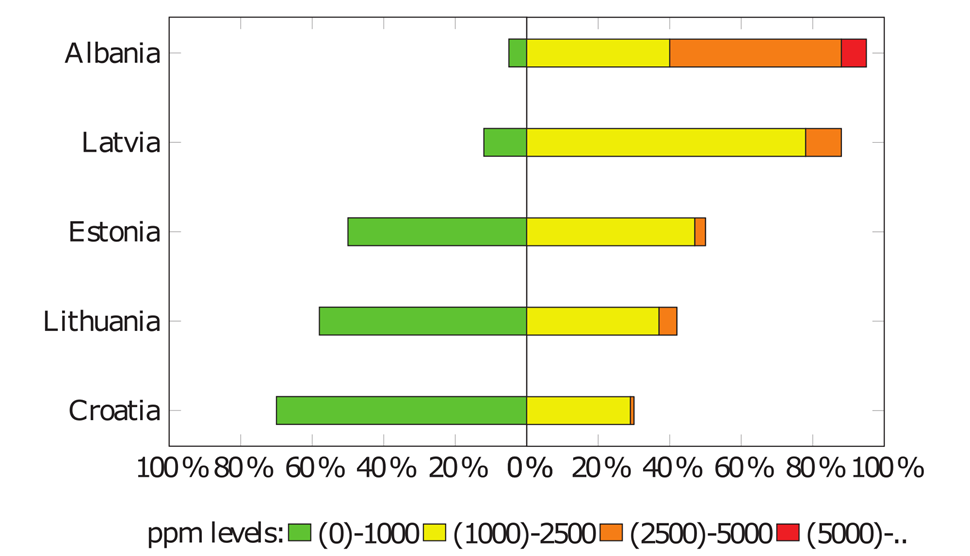 Illustration of the per cent of pupils’ person-time in classrooms spent at specific CO₂ concentrations (ppm) in the WHO Schools Survey pilot studies.

During the study, 20 schools from different countries were monitored for a period. The result of this screening was that in some schools the students were exposed for CO₂ levels over 1,000 ppm 90-95% of the time spent in the classroom, whereas this number was 30-45% of the time in other schools. In some schools, levels above 2,500 ppm were found to be exceeded during 50-55% of a school day. Actions to lower these numbers, such as forced ventilation during breaks or mechanical fans in the ventilation system, were not being used – mainly because of poor heating, i.e. forcing fresh air into the building would lower the indoor air temperature too much.

In the context of this report, it is easy to understand that the indoor air quality, not only in schools but also in private households, are largely dependent on ventilation and heating. Today, the countries that do have recommendations mainly use the indirect measure of ventilation rate, whereas the use of real temperature, humidity, carbon dioxide, and particle matter would be a better way to get a direct indication of air quality.