Jun 17, 2020
A test was conducted by The Swedish magazine, Elbilen (The Electric car). The idea of the test is that cold air in the cabin of an electric vehicle, which needs to be heated to 20 degrees C for the driver's comfort, greatly reduces the car´s range (the maximum distance a vehicle can travel without refueling).

The range can be extended by using the recirculation function, however cabin air recirculation in this way produces dangerous levels of C02 in just minutes. These levels of CO2 are invisible to the eye but affects brain cognition, and causes drowsiness, making it very dangerous for the driver and traffic.

But what happens if you recirculate the air to an acceptable level of CO2, then let additional fresh air in, then recirculate the air once again? We call this technology, demand controlled ventilation (DCV). Since this function does not exist in the automotive industry yet, the test had to be performed manually.

Two Tesla model 3’s were brought to the starting point of the test; a remote region of inland Sweden with sub-zero temperatures. One car was driven by a journalist from Elbilen and the other by one of our engineers. Both cars were equally charged overnight and then the test drive began.

The car driven by Sensair’s engineer used normal intake of fresh air heated to 21 degrees C and the other one driven by Elbilen’s journalist used manual demand controlled (MDC) intake with air quality limited to a maximum level of 1000 ppm CO2. (Just so you know, 400 ppm Co2 is considered fresh air these days). After a 120-kilometer drive in the middle of nowhere they stopped to compare the data. The results showed that there was very little difference in consumption. 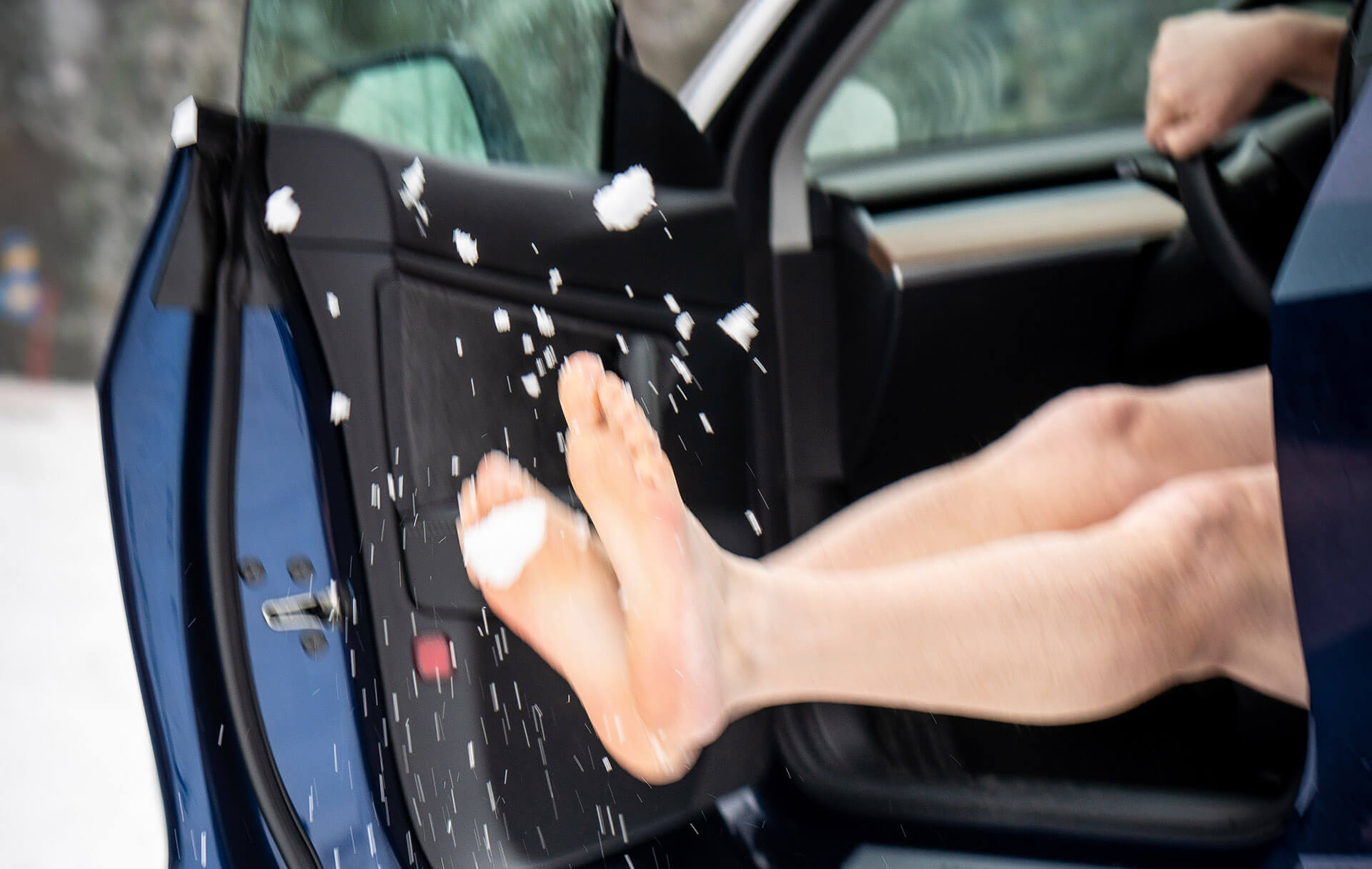 Maybe a higher temperature will make a difference? The outside temperature was now around zero and the weather had rapidly changed during the first ride. They decided to give it another go, but this time the cabin temperature would be raised to 30 degrees C. To tolerate the excessive cabin heat they took off some clothes, hence the bare feet and underwear, if you were wondering.

The assumption was the increased temperature would make it equal to driving in minus 10 degrees C by maintaining a 20 degree C in the cabin. They hit the road again back to where it all started, but again the difference in consumption was too small to make a conclusion. What can we tell you that actually came out of this test? Well, you can drive with demand control ventilation without getting fog on the windows.

Another thing that became clear was that driving styles and other factors such as driving experience and technology played a role and may have influenced the results. To avoid data noise and the human factor a standing test with only one car was performed. This time the same car was tested twice. Once with normal air intake then with demand controlled recirculation. The battery was charged equally both times.

Time to reveal the results! The demand controlled recirculation car outperformed the range of the car without recirculation by a considerable margin (more than 2x its range) in this standing test. Our engineers believe that it is possible to use the surplus of energy, with less heating, to increase the range by 100 km when it is cold or hot outside. How? With demand controlled ventilation monitored with Senseair´s CO2 sensors.

Click here to view the video of the test.